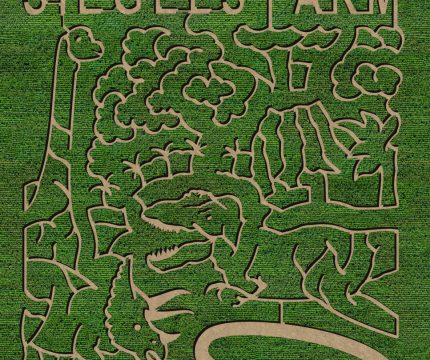 Walk into Jurassic Farm and get lost in the hidden prehistoric land of your favorite dinosaurs found only at Siegel’s Cottonwood Farm in Lockport, IL.

Siegel’s Cottonwood Farm recreates the fallen Jurassic world on the farm with its 10-acre, five-mile-long corn maze designed to give you a unique fall adventure. Trace your favorite dinosaur, walk through the palm trees but don’t succumb to the volcano.

During Pumpkin Fest 2022, the dinosaurs come alive on the farm through daily performances of the Triceratops, T-Rex and a Velociraptor. Children can have a DINO-mite experience in the Dino Barn open all day, every day.

The theme is especially fitting because it just happens to coincide with the recent dinosaur discoveries that occurred over the summer all over the world. Share photos with your discoveries on the farm!

Children 12 and under must be accompanied by an adult
Caution: Maze could be muddy, remember to wear old shoes or shoes you don’t mind getting muddy.
I’ll bet you’ve heard one person tell another person to get lost, more than once, this year. And here at Siegels Cottonwood Farm, we’re gonna tell you again…Get Lost….But our Get Lost, is probably different than what you’ve been hearing from other people…When we tell you to get lost here at Siegel’s Cottonwood Farm. We’re telling you to head on over to Siegel’s Cottonwood Farm “Super Mario Brothers” Corn Maze! And this year’s Siegel’s Cottonwood Farm is actually the opposite of telling someone to get lost. So instead of trying to tear each other down…Let’s Work Together, Let’s Live Together, And let’s put our differences aside, because when we unite, we are stronger together. This year and every year from now on we are all about unity and love for your fellow man or woman…with so much darkness in the world today, you go out there and be a light! So Grab your family or friends and come get lost and Harvest family memories in this year’s World Famous “Super Mario Brothers” Corn Maze, Because Getting Lost has never been this much fun

Creating a custom corn maze actually starts several months before the corn is even in the ground, and, contrary to what most people believe, is actually cut while still only ankle high. It then will grow big and tall into the pattern previously designed and laid out in the field, like this photo.

Everyone is invited to come out to try their luck in navigating through the 12 acres maze! We encourage everyone who takes on the challenge to post their photos with hashtag #SiegelsCornMaze.

The  cornfield maze opens end of September thru Halloween at Siegel’s Cottonwood Farm, and will be open daily from 10:00 a.m. – 6 p.m. through Halloween. *Please note our big cornfield maze is only open Weekends and Columbus Day* but be sure to check out our smaller 2 acre maze; Spookley the Square Pumpkin which is open daily during Pumpkin Fest.

Siegel’s Cottonwood Farm’s mazes, Pumpkin Fest and U-pick pumpkin patch have been recognized as one of the top 10 in the country by TravelChannel.com, MSN, Yahoo, FOX News, HuffPo and Tripping.com. 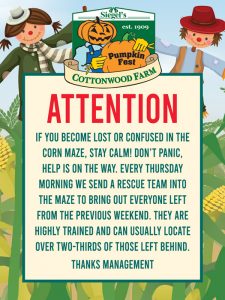 About Our Corn Maze

One hot fall September day in 1956 Farmer Paul’s brother Art, at the age of only 2, left on an adventure. He started out by leaving the safety of the front yard with his little red wagon to join dad only 300 feet away. He did this by way of the cornfield. It did not take long before he really did not know which way to go. So he just kept walking, thinking all he had to do was walk a little more. He continued through the cornfield that by now was quite hot. He got more and more frightened with each step he took.

By lunchtime mom and dad began looking frantically for their then youngest son with no success. The neighbors, police and even the Stateville prison guards were called to find Art. After checking all the buildings and even dredging the horse tank with a pitch fork there was only one place left he could be, the CORNFIELD. After hours of searching, little Artie was found over a mile away, through the hot corn field, eating cookies at a neighbor lady’s house.

10 Acres and 5 miles of paths to choose from! *Weather Permitting*

We are proud members of  The MAiZE Family.

Click here to give us your idea for our maze theme/design.